Hi.
I have the first version of pi-top 3, and I have installed Sirius, and I don’t see how the battery is doing, and whether or not it’s charging when the charger is connected. Can you help me please? My thanks

Hi @agapieme, could you try running the command pt-battery for me and let me know what the output is. It may be that the battery icon GUI hasn’t loaded correctly but the pi-top can still talk to the battery pack. If you can see information like in my screenshot, then it’s likely the GUI 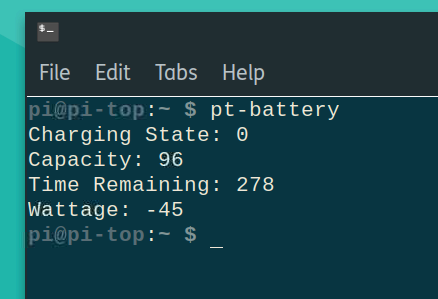 Hi @RezIN
First I appreciate the answer.
I have already discovered the source of the problem. The problem is in the alleged failure of the HUB that does not communicate properly with the Raspberry (with the GPIO). I found out with the lack of resources (no battery) response, after making the pt-battery command, and also after following the steps mentioned on the following page: https://github.com/pi-top/pi -topHUB-v1
Now the solution will be to buy another HUB, which I don’t know if they sell. Or is there another solution?