Well that was really simple to do, can be done from any micro controller to be honest or anything that can supply the logic high of 3.3v to the power switch pin.

@duwudi your idea works and here is how, thanks to @wil 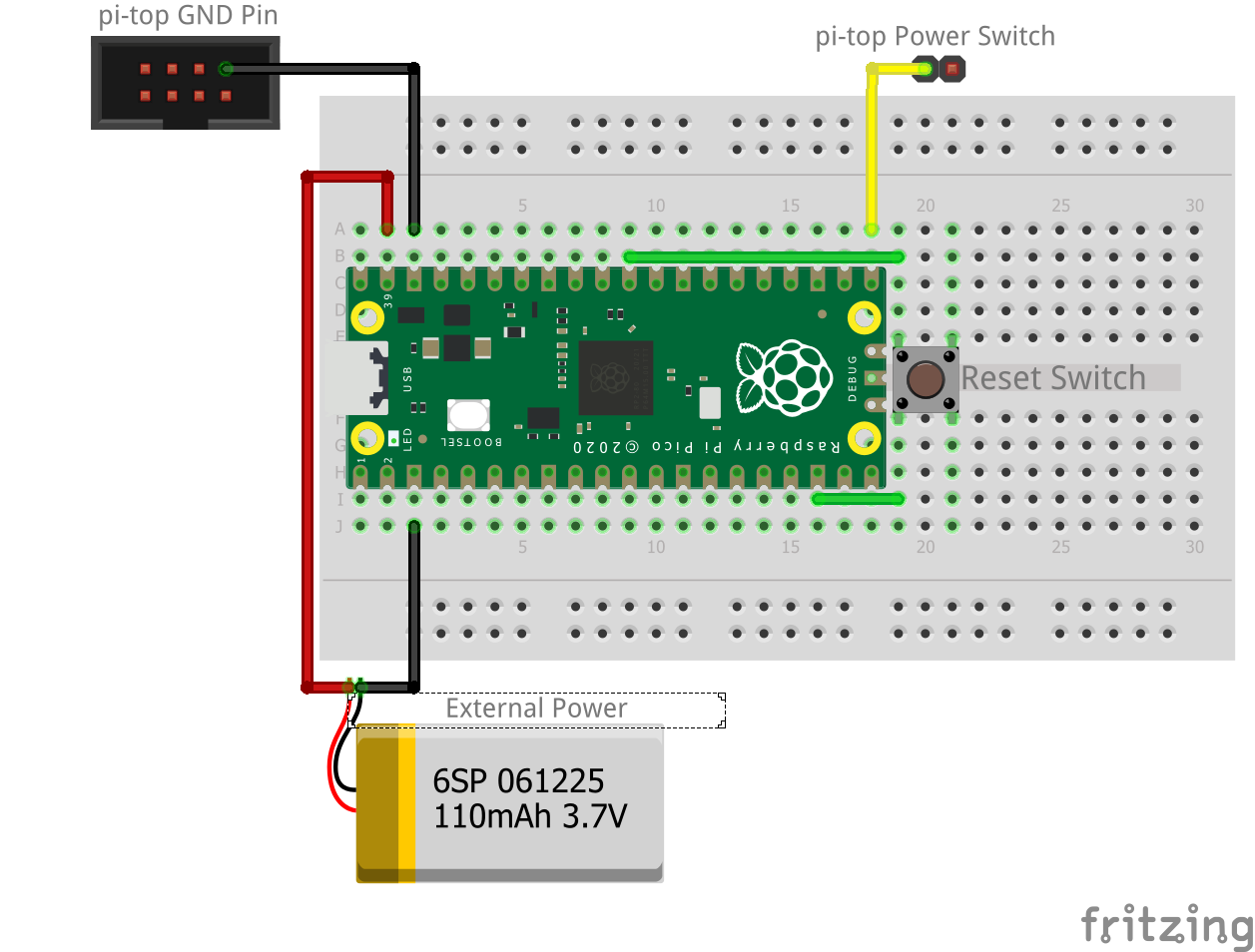 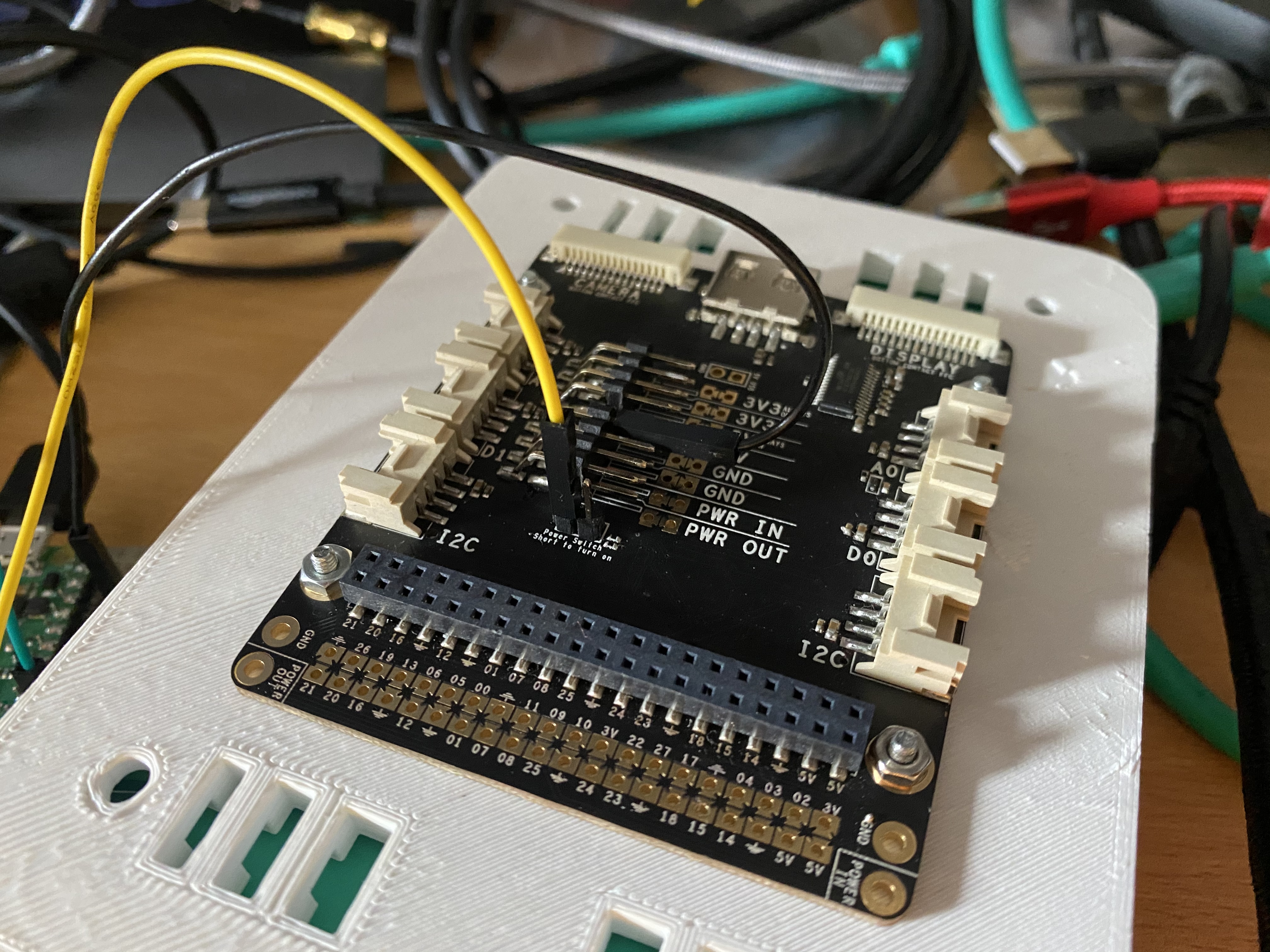 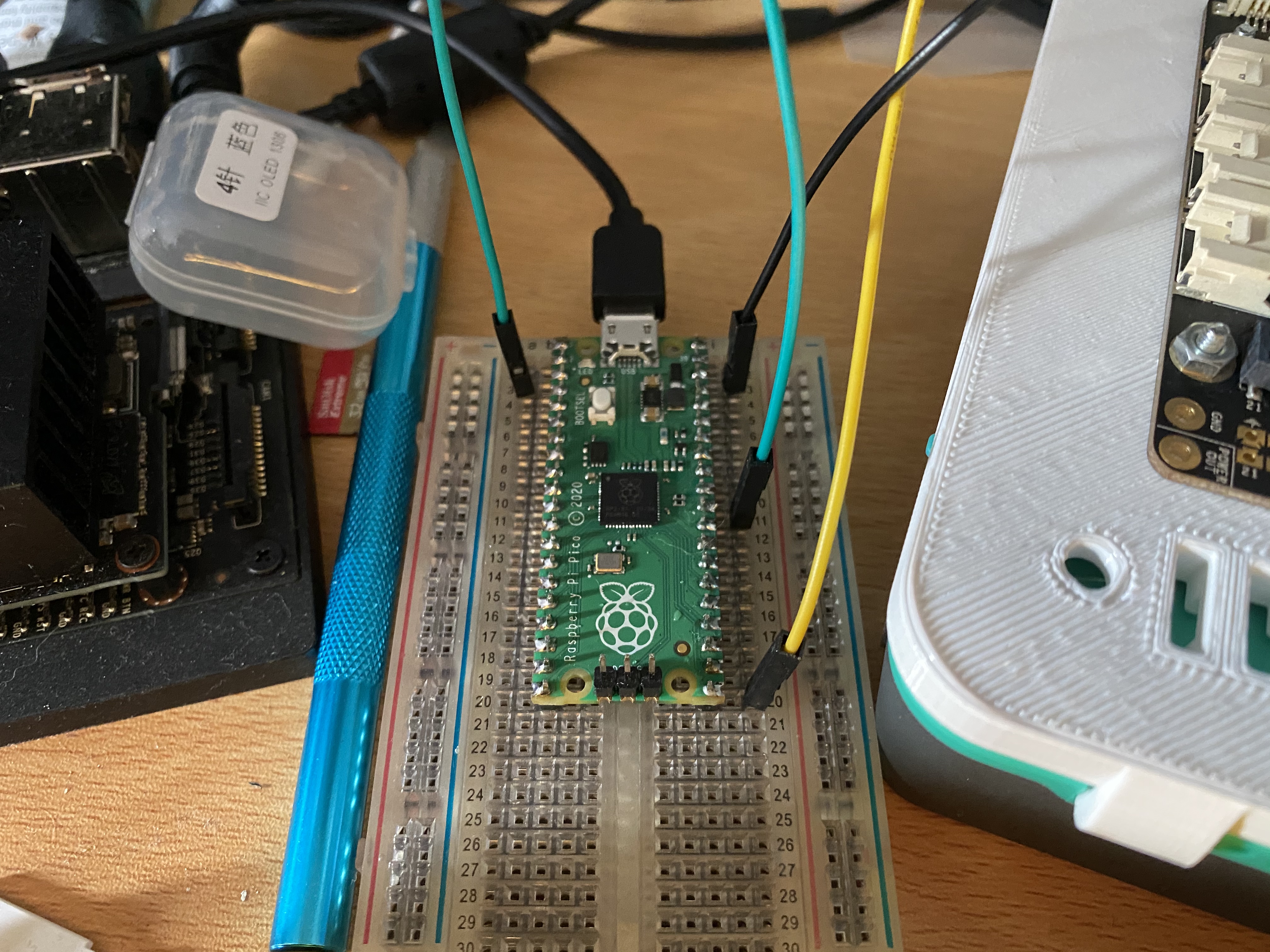 so, um, excuse the connectors, they are just for illustration purposes

Power can be from USB or VSYS, please ignore the battery, as its there as illustration to represent that power from an external source.

Program is extremely simple, and do remember that this is a test

Powering the Pico directly from the UI PCB connected to the pi-top had an oddity. @wil maybe you can explain.

This made me power the Pico from USB from my Xavier NX as it was the closest device to the Pico. I have also tested taking a 3v3 and GND from the Xavier NX GPIO to GND and VSYS to the Pico and that also works.

0.3 Seconds and 0.5 seconds sleep timer was too short, 1 second is perfectly fine

@wil NOW its tested and works, nothing went boom or went up in smoke 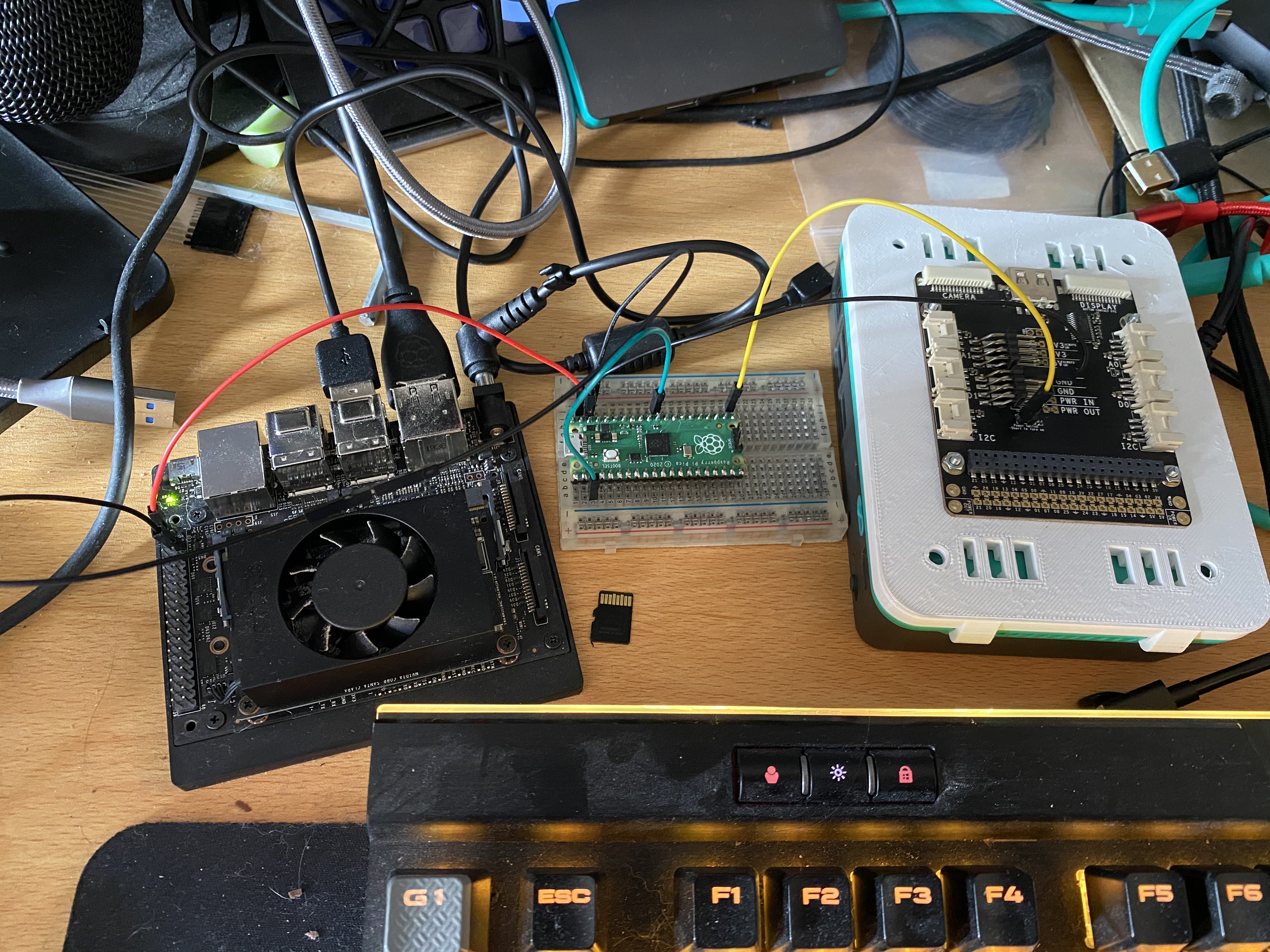 Looks good! Although there may be different system grounds. Could you try powering it the with the UI PCB again and connect the pico ground to the UI PCB ground? They need to share common grounds and need to be on the right system ground to send signals properly. Battery ground and charger grounds often differ be an you have a battery protection IC that isolates the 2 parts. Devices as complex as a computer may have many grounds for different sections of the board to isolate boise and signals too

the ground was connected, either way i tried to power the pico from the pitop would just switch it on

Hmmm, ok, I’ll have a look at it later tonight and see what results I get

oh its working, have to have power and GND connected before the signal wire then just remove the reset

Ahhh, gotcha. A lot of Macy’s use a diode to protect their pins and can actually power themselves through IO. This protection can power it and hold the pico in an unknown state until a reset can occur. Have you tried jumpering the reset pin? 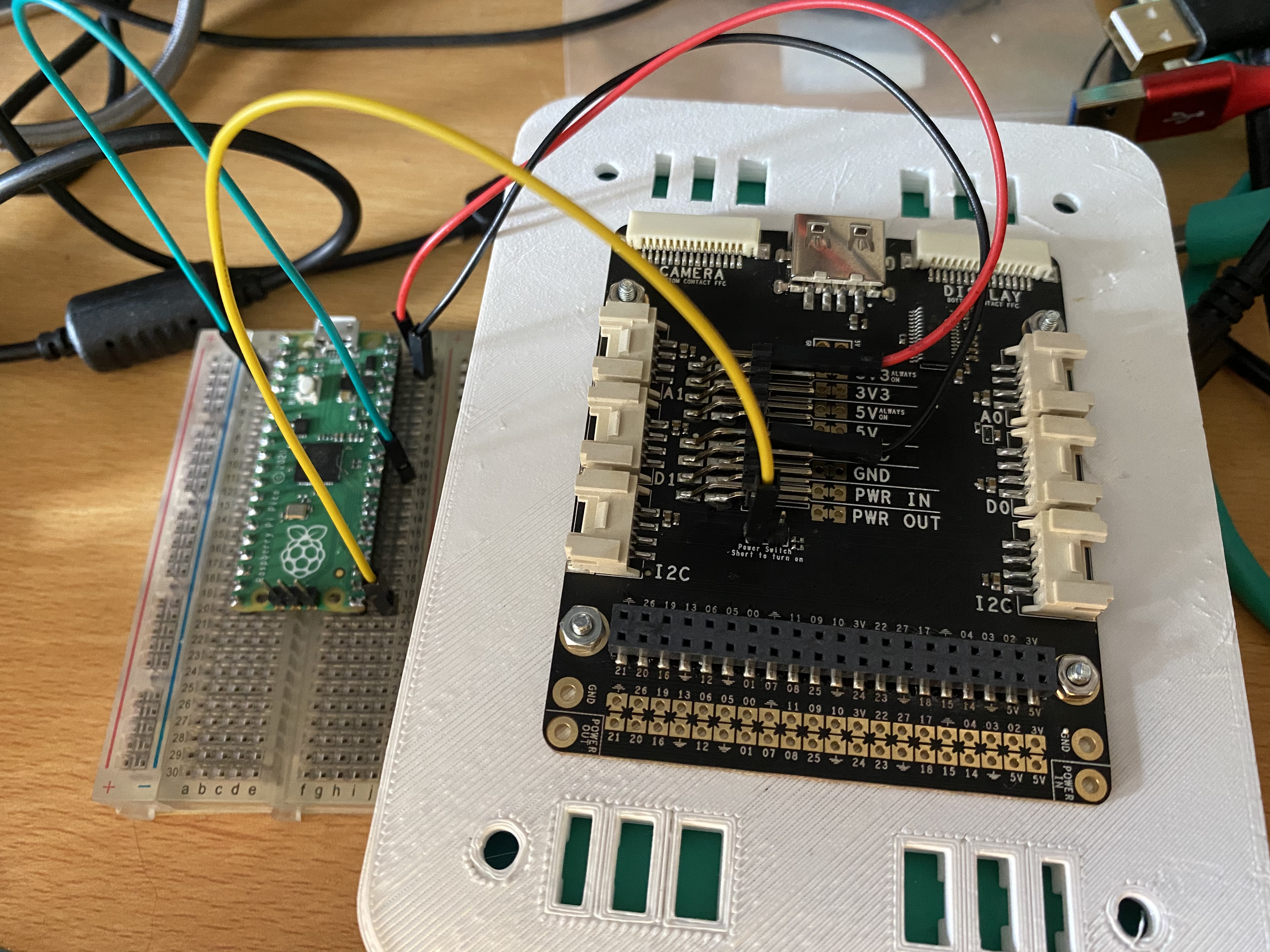 Ah, I totally missed that. Sorry, just woke up

No problem, at least we now know how to do this for our project

@CAProjects Great! This is the first project I know of that integrates a Pico with a pi-top [4]

Do you have plans for the next steps?

1 step would be to detect if the pi-top is switched on, but this will be integrated into my weather station project. will also be looking into transferring data between pico and pitop as well

I also tweeted this mentioning the pitop team and raspberry pi

Also @duwudi you can certanly take some credit for this, i did not know it was possible till you mentioned it

Really looking forward to seeing you implement pico <-> pi-top comms, that’ll be so cool! Which comms peripheral you choose to use will tell us a lot about you:

Serial UART: I’m looking for something quick and easy
SPI: I have a lot of data to transfer
I2C: I hate myself

Haha, I love it

Other things to note:
UART: interruptable transmissions.
SPI: need to spend some time here outside of an interrupt.
I²C: still hate myself haha

what about SD card

i so have a micro SD card break out that i want to try get working on both the pico and raspberry pi so could, in theory, log the data to a daily file, when the pi turns on it grabs the file from the SD card and uploads to my NAS via FTP

I think the MCU has to communicate with the via SPI to most SD card adapters… but I haven’t done a whole lot. As far as 2 Masters and a slave type setup, I wouldn’t even know where to begin without researching it haha

So I got an Arduino Due, the main reason for the Due is the 3.3v logic output and not the standard 5v.

Important Note
Majority Arduino has a 5v logic output do not try this without using a logic converter to decrease the logic voltage. Not doing so will fry your pi-top

I attempted this with checking with an Arduino geek friend before doing this. With talking to him about requirements, he told me to get the Due